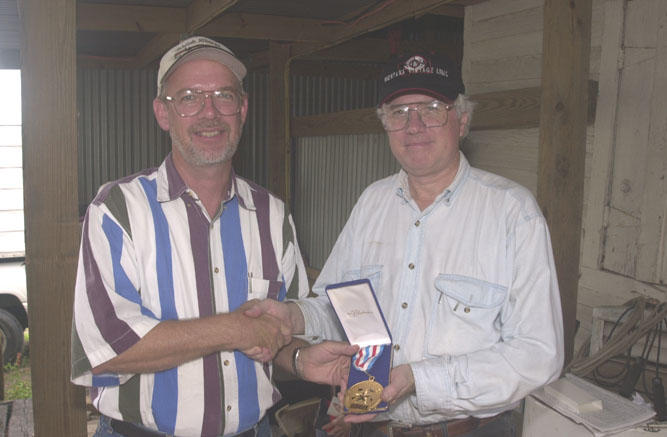 A minor format change saved the Club Championship from being washed out and thus reverting to the scores recorded in Saturday’s Match #1. Based on the reports of more than 1 weather liar, we were faced with having a pretty decent day on Saturday with rapidly deteriorating conditions on Sunday. Taking the liars at their word, we decided to try to shoot half of the 2nd match as soon as the first match ended.

This plan worked pretty well with 2 stages of the 2nd match being completed on Saturday afternoon. As we gathered on Sunday morning, most of us had driven through showers to get to the range during the morning commute and the general feeling in the air was dampness. We got started on time and had a couple of drops falling on us during the third stage. As we started the completing stage 4, more rain could be seen. We could look through the spotting scopes and see the rain downrange. By the time we completed stage 4, several shooter endured rain during their shooting which probably affected overall results but we were able to get the match in and the prizes distributed.

Ken Wienken, winner of 2 previous club championships claimed this one without being involved in a shoot-off. Prior year’s winner, LeRoy Tanner had a tie score with AA shooter John Knesek, Jr. who vaulted himself into the AAA class with a triple A score and a master class score. The resulting chicken shoot-off was won by LeRoy who is not known for his love of this particular method of breaking ties.

We had a couple of shooters from the AA & A ranks distinguish themselves with some excellent scores. David Burger, from the AA ranks, fired a master score 32 on Saturday while Mark Zimmer, in the A class ranks, fired a fine AAA score of 28 on the Sunday.

this time of the year, the least of which is the opening of the hunting season.

With only 2 matches remaining for the year, hopefully you guys and gals will make plans to attend. Remember that we have matches on the 2nd Saturday only of November and December and will resume the 2-a-month schedule in January.

This was the first year of the Butch Balcomb Memorial Earl Schibe match. Thanks to Jerry Harres for creating a memorable trophy target which was not revealed until the awards ceremony on Sunday. That target along with the annual plaque we had created was won by Ken Wienken. Ken gets the privilege of creating next year’s target and we’ll see if he can get the creative juices flowing to come up with an idea that commemorates the memory of Butch.

Thanks to all of those who attended the club championship and those of you who did not, make plans to compete with us next year.